Sign up for our emailing list to get news about Gallon Historical Art, exclusive coupons and more.

Farmers Against The Crown

Ridgefield, Connecticut – April 27, 1777 – Local Ridgefield farmers resist the British forces as they advance to their ships on the coast.

Dale takes us back to a moment in time, Ridgefield, Connecticut, April 27th, 1777, at a barricade being fiercely defended by a quickly assembled Patriot militia against veteran British regulars.  What brought us to this moment was a Redcoat disembarkment of 6 regiments, complete with artillery, on the Connecticut coast two days prior.  Under cover of darkness and rain, Major General William Tryon led this raid into New England to destroy Patriot supplies in Danbury Connecticut.  After completing their objective, they started back to their ships on a different route from which they came.    Sir William Howe had sent a diversion up the Hudson River to keep Continental Troops away from this raiding force. He also placed some experienced Generals with the battle tested Redcoats.  With all this careful planning, they did not expect the stubborn resistance that was forming to impede their return. 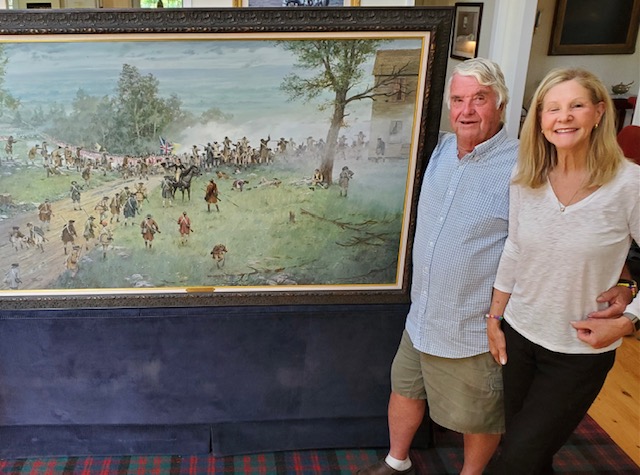 Dale and Anne with the oil painting Farmers Against the Crown.
Released 2021

While the Redcoats were doing their work in Danbury, Patriot Generals David Wooster, Gold Sellick Silliman, and Benedict Arnold met on the 26th to plan a strategy to impede the Redcoats return.  Gen. Wooster would take 300 of the estimated available 800 militia that were assembling to harass and slow the rear of the Redcoat column, achieving initial success on the 27th before his mortal wounding.

Continental Brigadier General Arnold would lead the militia, and a scant number of Continentals, at the Ridgefield barricade.  He sent Lt Col Gould to lead the right flank. Arnold also deployed some militia to the left flank that was thought to be impenetrable by a rocky ledge faced by a swampy lowland.

The hastily built barricade blocked the road into Ridgefield and extended from Benjamin Stebbins’ (a Tory) house to an elevated area on the west side of the road. As there are no known highly detailed accounts of the barricade and the fighting, the artist has laid the central part of the barricade forward, to the “military crest” of the hill, giving us a better glimpse of the attacking Redcoats.  With Arnold’s military experience this layout is very plausible. After an artillery barrage, the Redcoats attacked by column into the teeth of the barricade and simultaneously set out two separate flank attacks.   Although outnumbered 3 to 1, Patriot forces stood at the barricade and fought with the urging & leadership of Arnold himself. This barricade would not be breached until after the flanks were turned, with Gould being killed on the right and the ledges being scaled on the left.  The moment of time shown here is near the end of the fight at the barricade.  Arnold will soon cross the road to help stem the Redcoat penetration on his left flank.  A lost cause as his horse would succumb with 9 wounds & go down trapping Arnold momentarily.  The Patriots withdrew in ragged haste, offering scattered resistance as they fell back thru Ridgefield. Although the Redcoat forces succeeded in their goal of destroying the Rebel supplies at Danbury, they failed in getting the citizens to turn out in mass to their support, actuality it turned more of the citizenry to the Patriot cause.  Due to this response of the militias of Fairfield County CT and Westchester County NY, the Redcoats would not venture another deep inland incursion into New England from the coast.