Sign up for our emailing list to get news about Gallon Historical Art, exclusive coupons and more.

Gettysburg, PA November 18th, 1863 6PM President Abraham Lincoln arrives at the railroad station for the dedication of the National Cemetery the following day.

Philadelphia, PA, September 1861 – Brigadier General John Fulton Reynolds and Catherine Mary Hewitt enter into a secret engagement before he reports to the Army of the Potomac. She promised not to marry if he were killed, and became a nun after his death at Gettysburg in 1863.Release Year: 1997 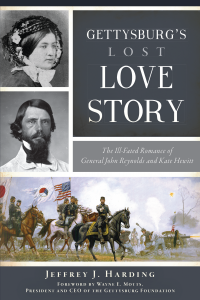 You may also be interested in Jeff Harding’s new book:

The Ill-Fated Romance of General John Reynolds and Kate Hewitt